Originally posted on allwomenalltrails.com; you can find the link here

I had family style breakfast with Jack who I met at the last shelter, Splash who I quickly became great friends with from Northern Outdoors who was a hiker from Kentucky having knee issues that has such a big heart and was hilarious, and Spice, a hiker from Illinois and some others.

It was sad to say goodbye to Splash but knew I had to to keep moving. I ran into a brother and sister named Jake and Lex who we had been crossing paths with pretty frequently.

I headed down towards the Kennebec Ferry shortly after 9 and was the third group to be shuttled across. Spice met me and rode in my canoe. I actually ended up spending a majority of the day hiking with Spice and it was a nice change to have a fresh face. We even swam at East Carry Pond for about an hour. We ran into two sisters section hiking together and a really nice couple section hiking from New Jersey.

We set off to the next shelter and still wondered where our friends were because we hadn’t seen them all day. The terrain was not bad at all and we crossed/ passed by several ponds.

Once we had gotten to the shelter, we hung out and headed down to filter water. We heard a family voice coming down the trail. It was our 4 friends! We pushed on a few more miles to camp. As we were sitting around eating, Top walked up, completing our little Sobo family of six. 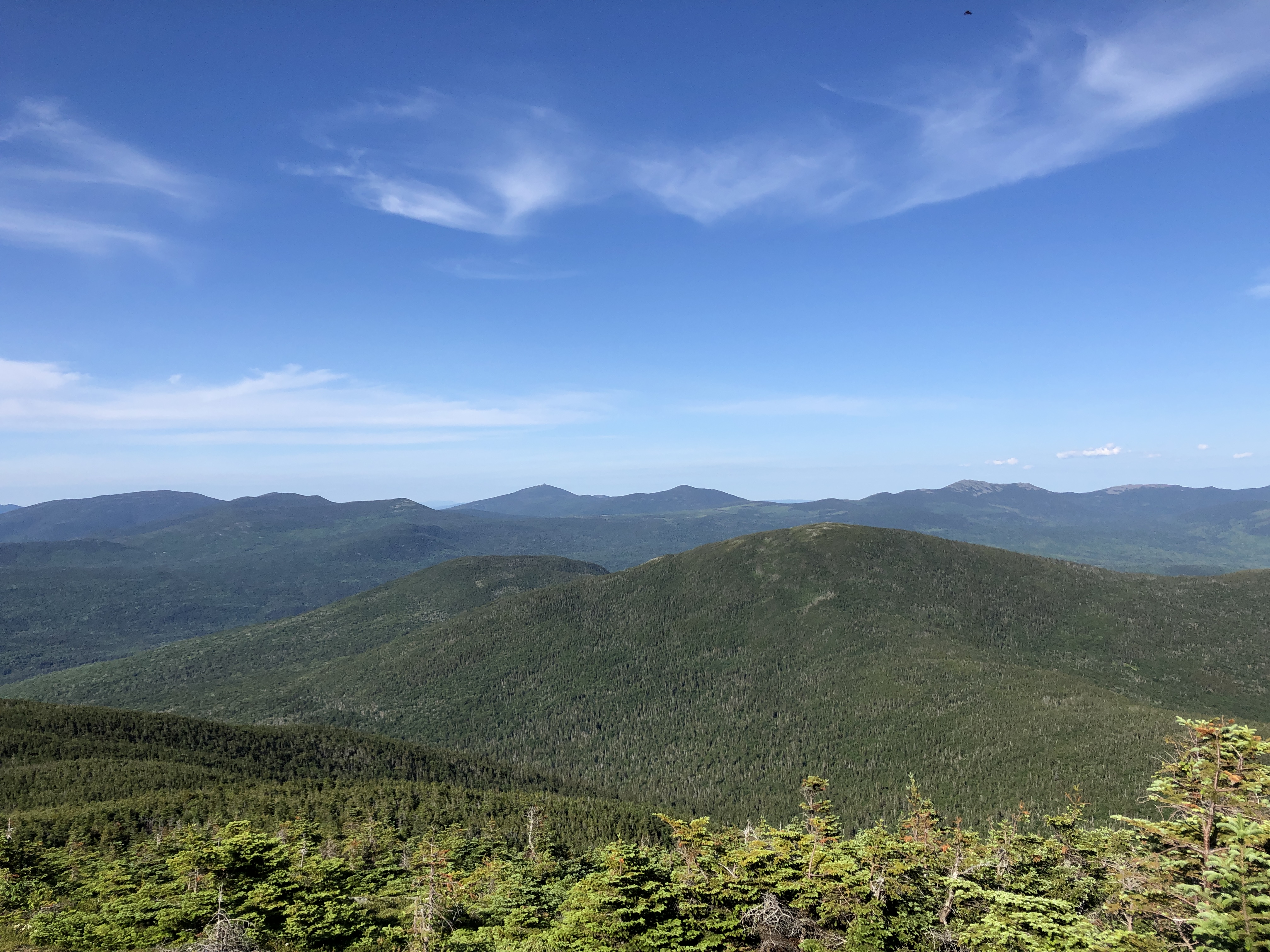 Jake, Lex, and Lola (their pup) made it into camp last night around 9:30 so we were a little family of 8. Everyone pretty much was awake at the same time but Wild Card and Slick Rock took off first with myself following closely behind. I caught up to them at the first privy. I walked with them for a bit shortly after but passed by only to have them pass me at a water source and catch up to them again when they were taking a break.

After that, I spent the day solo and it was great! I’ve been working on breathing techniques going uphill and helps significantly with the many climbs. First was up and over little Bigelow and on the Avery’s Peak, which wasn’t as hard as everyone had said it would be.

I was chasing the weather this day and it was cool how much the temperature dropped in between the little caves from Avery. I felt in awe of reaching my first 4000 since Katahdin especially because of how much work it took to get there. I headed for Bigelow and summitted that. My feet were starting to hurt so I took a break before the rain rolled in to elevate my feet. It was a race to get up and over North and South Horn to escape the weather. The rain was coming down pretty hard and I got drenched. Luckily I saw the Horn Pond day-use lean-to to escape the rain and wait for my friends to catch up hoping that they managed to get over the summits before the weather changed.

A few hours later, plans had changed. Wild Card and Slick Rock wanted to spend the night in town. The boys decided to camp at the Cranberry campsite and I happily slept in the lean-to with some weekend hikers.

I was happy to have the boys camped close by. They even got up around the same time as me but I headed out as I was freezing. The rainy weather had brought cooler weather and there was a roaring wind all night in the lean-to. I walked slow hoping the boys would catch up so I wouldn’t have to catch my first hitch alone. They didn’t catch up by the time I reached the road.

There was a small SUV hanging out across the road where the trail came out along the highway. I grabbed my mace and put it in my pocket just in case. I slowly creeped out of the woods and the car looked like he was about to pull out but sat idled. As I got closer, the car pulled onto the road and their reverse lights turned on. He slowly backed up and I approached the passenger side window. This man was willing to give me a hitch into town and I didn’t even have to stick my thumb out! He was a section hiker planning to start the next day. Woo! He took me to the Stratton motel where I saw Coulter out in the porch.

I thanked the kind gentleman and offered him some gas money which he politely declined. I dropped my pack and was greeted by Papa Smurf, who takes care of the hiking hostel.

Shortly after, I headed to the gas station for a breakfast sandwich and coffee. I ended up buying two sandwiches in order to pack one out. I walked back to the hiker hostel to eat my sandwich and drink my coffee. At this point, the boys had just been dropped off.

Then I headed across the street to resupply at the market: I got an apple (which I ate right away), baby carrots, muffins, an avocado, bagel chips, Chex Mix, and mashed potatoes. I only needed a few things to make it to the next town. I walked back across the street and organized my food, dried out my wet stuff, washed my dirty socks and underwear, and charged my In-Reach.

By the time I was finished choring, Coulter and Wild Card we’re ready to go back on trail and I planned to catch a ride with them. We didn’t hike much together. I hiked solo for the most part only crossing paths at water sources.

I enjoyed the climb up North Crocker mountain and was a little disappointed to find it to be a wooded summit. Then came with South Crocker mountain, which had an expectedly steep and rocky descent. My feet ached by the time I had reached Crocker Cirque campsite but I refilled water as a NOBO hiker passed and I had asked about my friends. They had kept hiking and there was no way the boys had even left yet or no telling they would make it far today after leaving them in town. I pushed on to stealth camp next to the river solo in hopes of starting the climb in the morning. 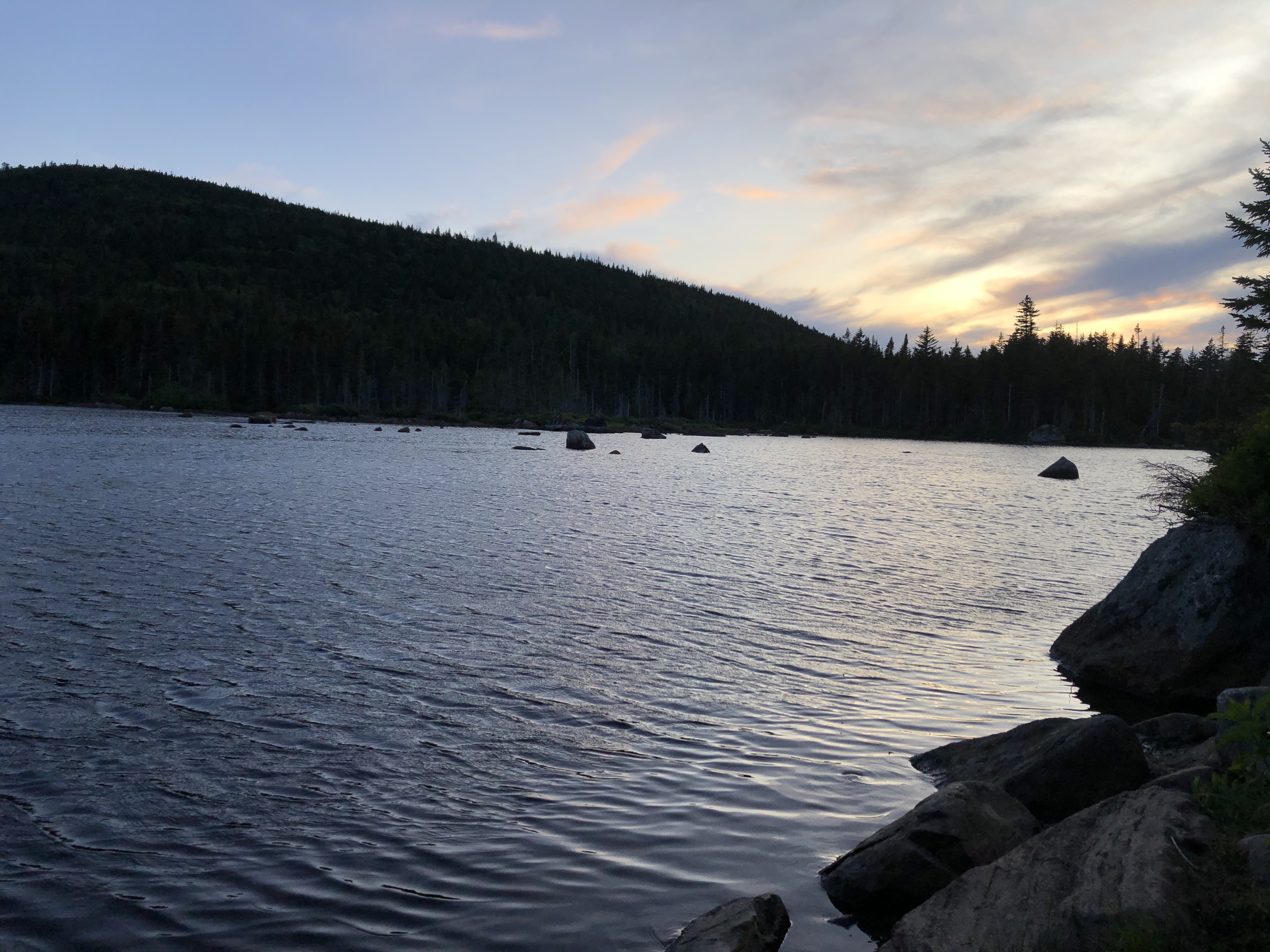 I woke up hopeful my friends or someone else had chosen to stealth camp with me but nope. I packed up and ate my breakfast sandwich I had packed out the day before. It was a steep scrambling climb up towards Spaulding Mountain. I ran into Two Decades, a nice gentleman who was on his last leg of the trail.

I got to the Spaulding Lean-to to take a break and quickly breezed through the trail until climbing up to Poplar Ridge Lean-to, arriving a little before 2. I took an hour-long break elevating my feet, eating, and filtering water, and contemplating if I wanted to push on. My goal was to Nearo into Rangeley.

Ultimately, I decided to push on and climbed up and over Saddleback Junior still liking my decision. It wasn’t until I was climbing up and over Horn Mountain that I was beginning to regret my decision to push on but once I got the glimpse of Saddleback Mountain I was in awe. Without that hiker high kicking in, I don’t think I could have made it. I raced down the mountain before dark reaching Eddy Pond a little after 7. Another hiker was camped there named Steady. I must have looked delusional quickly saying hi and heading to the pond for water. I needed to drink and eat dinner if I was going to push on to the lean-to. Steady came down and asked if I was okay. I apologized with my rude introduction but needed to get some food and water in me.

After talking to Steady and realizing he was an all right guy, I decided to stealth camp there. Turns out he was a high school teacher from Texas who had quit his job to hike the trail and move back home to Michigan to help take care of his parents. We watched the sunset over Eddy Pond and headed for bed. This was probably the latest I’ve gone to bed on trail the whole time but it was well deserved. 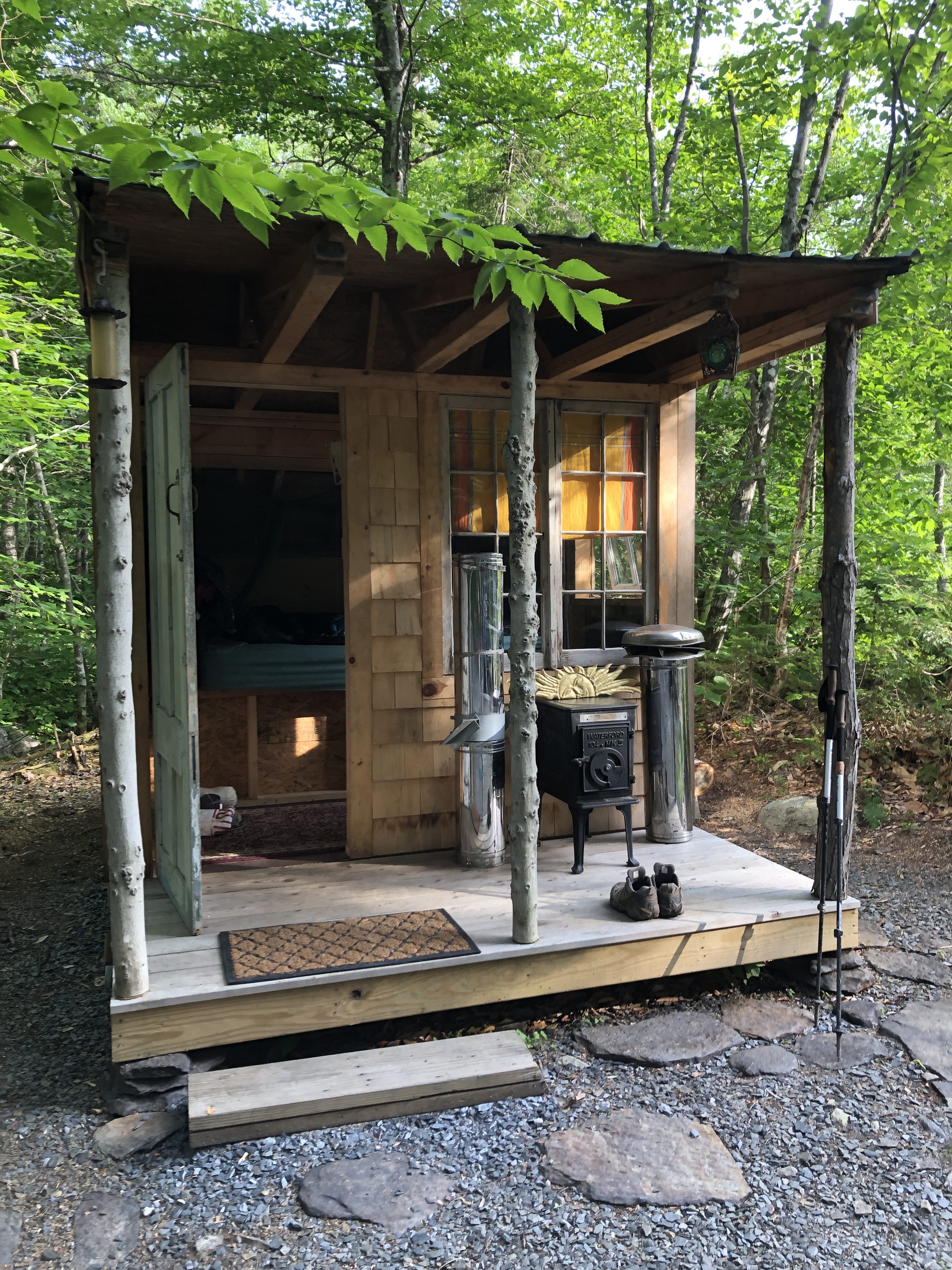 I got up around 5:30 and raced to the next lean-to I had wanted to get to last night to use the privy. On my way, I ran into Wrong Way! I had met Wrong Way back in January during my Georgia section hike when he was starting his thru-hike.  Back when I had stayed at Shaw’s I had heard he was about 100 miles away and for sure thought I had just missed him but surely not. He even remembered me and had heard I was back on trail. He even remembered when the mouse bit a hole in my sleeping bag the first night in Georgia. I spoke a few words for his YouTube channel and wished him on his way as he finished his journey.

I made it to ME 4 and walked up the road to the Hiker Hut. I didn’t have reservations but they were very accommodating to make space for me in a cute little hut.

Next stop was the Red Onion, where I grabbed a table for one. Dreamer, a hiker I met at the Hiker Hut, walked in and I invited him to sit with me. He shared with me what was to come in New Hampshire and I shared what was to come for him in the rest of Maine. He was sectioning New Hampshire and Maine but was quickly catching the bug. Dreamer writes poems about the trail and shared with me what he had, which was awesome! He can read them on outsidewithlarry.com. I enjoyed picking his brain about teaching in the outdoor ed. He even paid for my lunch gifting me with a little bit of trail magic which I rightly returned the favor buying ice cream for him a few doors down. We sat and ate our ice cream in Adirondack chairs overlooking the lake.

I had meant to catch the shuttle back around 3 but it actually left at 3:15 and I had just missed it. This led to us grabbing dinner at Sarge’s which I left feeling pretty stuffed- that’s when I heard some hikers had come in and one of them was Spice! They were at the grocery store where we were headed next to resupply. I saw Charlie, Top, and Spice sitting on the side of the store and was happy to see them.

I headed in the store to grab a few things and headed back to the Hiker Hut to organize my food, elevate my feet, and do some yoga with Spice.

Dreamer offered to gift me with one of his poems as a keepsake and I was elated. Those two days spent solo was totally worth it to have these little encounters that meant so much! 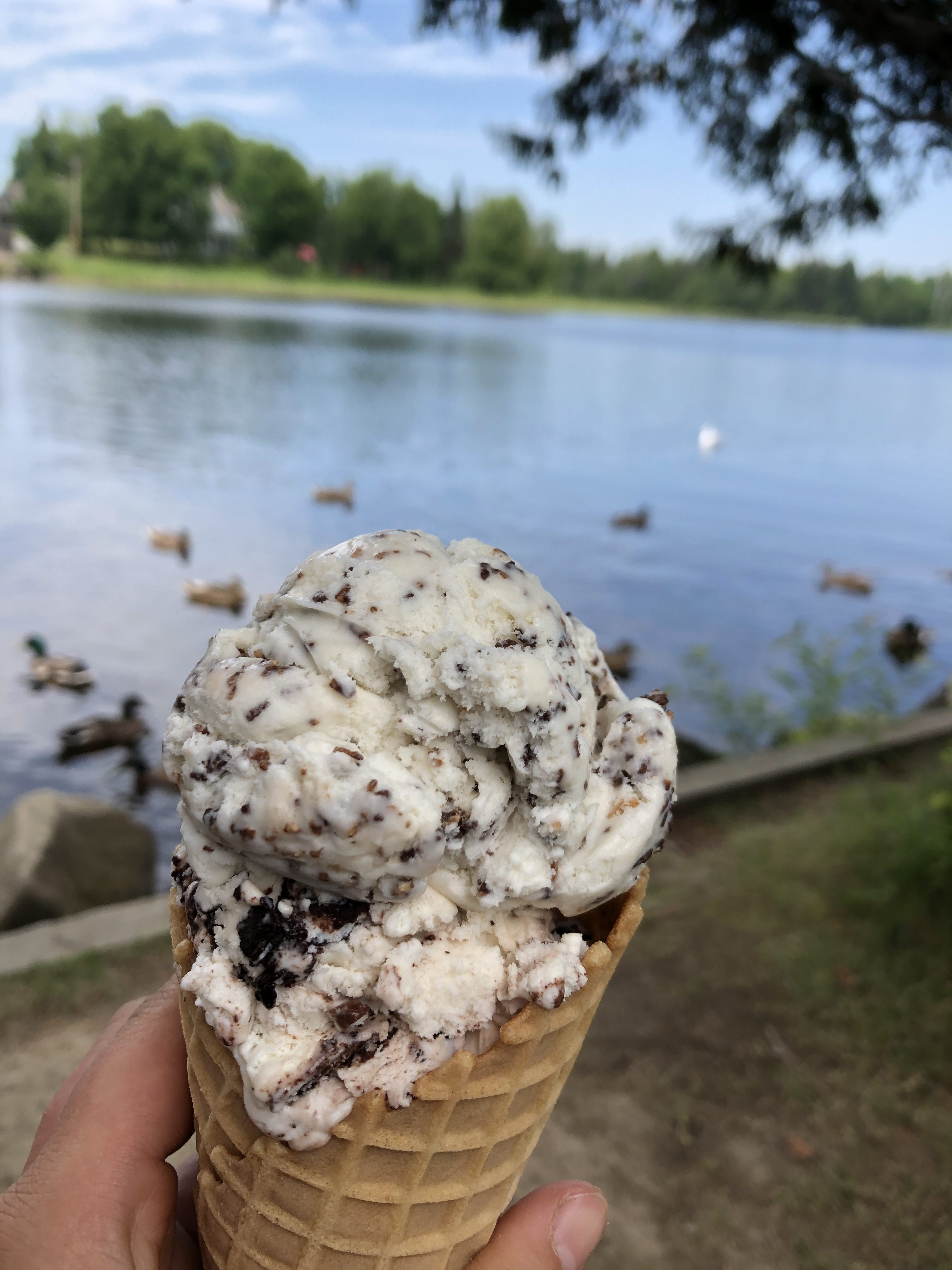