Originally posted on allwomanalltrails.com; you can find it here

I had woken up several times within the night from a sore belly from eating way too much at the dining hall but was still hungry for breakfast. I started to pack up and was happy to hit the co-op as a choose your own breakfast option.

After One Step, Bumblebee, and I were all done we headed towards the NH/Vermont border. I found some trail magic on the way. One Step had to wait in town for his package, so BumbleBee and I headed for the bridge. We crossed into Vermont, took our photos and said our goodbyes. This goodbye felt a little bit different than the rest. I didn’t know anyone ahead and everyone was now behind me. I had a little bit less than a week on trail. I could do this! I felt slightly emotional and was missing my bed and my family in particular. My bag was heavy and I walked on.

As I neared the first shelter, I heard some voices and decided to stop. Hoverfly was down there, a guy I had crossed paths with before, and a couple NOBOs. It was nice to sit and chat and exchange some advice for what was up ahead for them in the White Mountains.

I begrudgingly got up to walk four more miles for some more trail magic at the Blue Barn. When I had arrived, some other hikers had just gotten there too and planned to jump off the bridge into the river. I wanted to do that! I quickly took off my socks and shoes. I handed my phone to another hiker to film and I jumped in. I didn’t land in the water the best.

Afterwards, I had to decide if I wanted to camp in their yard or keep going 4ish miles to a campsite that has been seeing a momma bear and her cubs nearby. Chips/Phantom was supposed to make it here but hadn’t left town yet. I made friends with another annual LASHer, Professor Fantastic, who offered to take some people to a brewery. At that point, I was sold! We scooped up Chips from the road, One Step came along, and we headed for Wayback Burger. It was nice to enjoy some new company and to feel normal for once. We got back to the Blue Barn around ten and stargazed for a bit before it was time to call it a night. 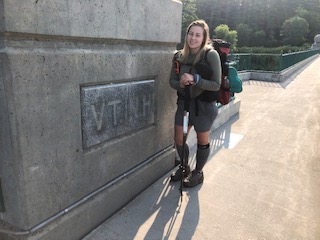 I woke up at 5:40 but still managed to get a late start on trail. I had some breakfast and enjoyed coffee. I was chatting with another hiker. A section hiker, who was an artist drew a portrait of me. It was awesome!

I headed for the trail a little after 8 and expected it to be “easy” but boy was I wrong. It was lots of ups and downs like rolling hills. I walked through some beautiful patches of grassy balds with wildflowers and wild raspberries.

I heard the Cloud Market wasn’t open on Sundays but headed to the Back Porch, which is a must! It had all I was dreaming of on such a hot day – a cold Gatorade and a homemade ice cream sandwich for lunch.

I hiked on to the Edge of the Farm for a sandwich and another Gatorade. I still hadn’t seen anyone all day but was feeling the heat. Chips, One Step and I had planned to camp at the Lookout. I got to the Winturri Shelter for water and had hoped no one else would show up so I could set up a tent.

Shortly after, One Step showed up and without a doubt was going to the Lookout which meant I was too. It was around 7 when we took off and made it just before sunset. My second sunset on the trail.

I woke up to One Step holding and shaking my foot to wake me up. We had wanted to catch the sunrise. I quickly packed up and headed to the Bird’s Nest and just made it in time. I got to see some colours.

We took off for the trail and planned to meet up at Route 100 to possibly camp at the Inn because Phantom planned on going there. The terrain was mostly uphill at the beginning until it turned gradual. I crisscrossed Ghost, a younger hiker I met at the Look Out, all morning.

I sat down at the Thundering Falls trailhead for a snack and was approached by some curious day hikers. The mom, in particular, was worried about me being alone. I don’t think she realized I had already done 400+ miles. I parted ways to wait at the US 100 for nearly 45 minutes without seeing One Step. I had to keep moving before I fell asleep.

I reached US 4 and walked to Pico Camp to catch the bus. I grabbed the bus, walked to Walmart to grab a couple of things and headed for the Yellow Deli, a place I had to experience for myself. It was very clean and the Tribe members were very friendly. As soon as I walked in, a guy said to me, “if you were in the forest, you would blend in with the trees.”

I had dinner down at the Yellow Deli, which was great! Then we walked to the Price Chopper for ice cream. 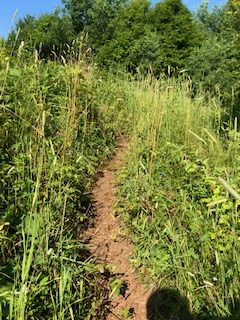 I didn’t even have a chance to sleep in this morning. I woke right around 5:40 and waited for breakfast. I walked into the Yellow Deli and was handed a smoothie. For breakfast, we were given fresh fruit, Pico, rice, and eggs.

I headed for the bus around 8:10 and just made it. We got dropped back on the trail a little before 9. A Nobo was slackpacking the section I was about to hike and Ghost was headed out too. The Nobo hiker was a girl named Liberty from Florida. We walked together for a bit chatting about the White Mountains. We climbed up the blue side trail to the Killington Peak and got the sad news that the restaurant was closed.

I kept hiking and ended up running into One Step and we caught up with one another. I kept going and eventually ran into Phantom again. She was headed into town. She hiked on as I grabbed water and I caught back up at the second trail magic cooler of the day! I met a family of 4 hiking the trail together as a flip flop, which was pretty cool. I walked the rest of the way to the shelter with Phantom and she headed into town. It randomly started to downpour and my tent was basically floating, so I had to stay in the shelter, which wasn’t terrible. 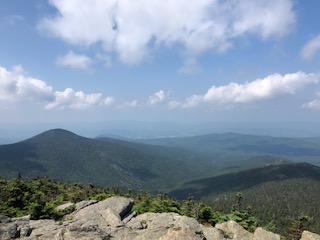 It felt good to be in a routine again and to be able to get up early. The first mile was slow but I quickly picked up speed as the terrain became easier. A NoBo Long Trail hiker informed me of some trail magic up ahead, which was 10.7 miles away.

I took a break at the second rock garden of the day and passed so many people. These people also informed me of this glorious trail magic. I walked up the hill and behold about 12 hikers sitting around in camp chairs. I was offered cold drinks, watermelon, and a cheese dog. To my surprise, most of the hikers were Sobo hikers and I hadn’t met anyone of them before. I hung out entirely too long for like 4-5 hours drinking beers.

Phantom knew one of the girls but was about 15 miles behind me. She managed to get a ride to join in on the fun. At one point, there must have been 20+ Nobo and SoBo hikers. One Step even joined too.

After spending way too much time there, One Step and I said our goodbyes to go stealth camp, cook dinner, and relax. Tonight is my last night in the trail for this leg of the race and my parents come to pick me up tomorrow. 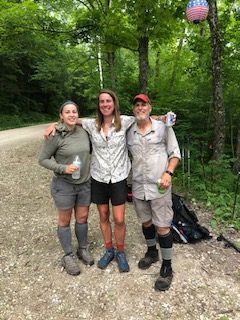 It was my last morning on the trail for this leg of the trip. It was a bittersweet feeling. As I started to walk, it took about a mile for my feet and ankles to loosen up.

I reflected on the trip and my experience. I felt spiritually I hadn’t been that great about connecting but in a way the trail always provided things every day. These things appeared everyday that I was extremely thankful for that – you seem to notice and appreciate more than you do in the real world. This was the greatest gift I could have given myself: having the summer off to do this trip. I couldn’t even begin to process and thank each and every person who impacted my journey.

Wags, a gal I had met the previous trail magic, caught up to me and we flip flopped each other all day. The NOBOs were in a particularly chatty mood asking for pictures and vlog interviews.

Wags and I hiked to Bromley Mountain eager to hang out in the netting from the ski lift. A few others caught up and it was time for my last 3 miles on trail. What made it even more special is my parents were waiting for me in the parking lot doing trail magic. Just how I started my hike alone, I finished it walking out of the Green Mountain Wilderness. 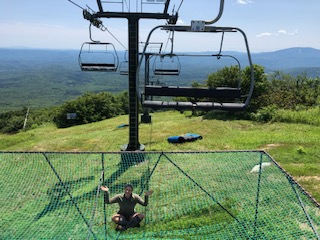